The Chaos Wars started with many gods
and ended with six. Better luck next time.
– The Proverbs of Shedey’uwr 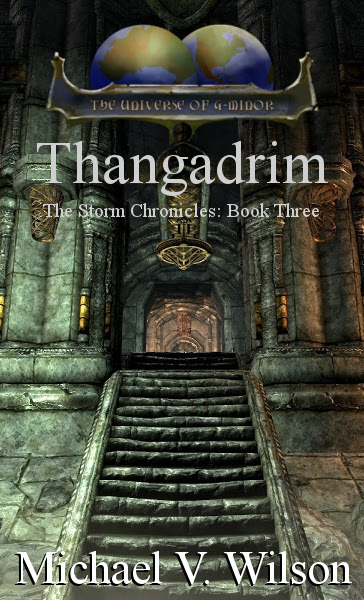 The world of Gaia had only one continent, also called Gaia, shaped somewhat like an oval with rough edges. It had an enormous bite taken out of the southern side, leaving behind a body of water known as the Azure Sea, which in turn gave way to the Milchamah, the Battle Ocean. On the eastern side of the Azure Sea was a long thin peninsula leading to the Plains of Aroon, which were three to four times longer north and south than the Serpent Peninsula. At the northern end of the mountains bordering the western side of the plains was a mighty lake, nearly perfectly circular in shape, blasted out of the ground by during the Chaos Wars. Not far south of this so-called “Crater Lake”, was Mount Wainsford, one of the highest peaks on Gaia. Standing at the opening of a tunnel on the slopes of the mountain was a dwarven warrior.

Durin, son of Drangor the Mighty, Third King of Thangadrim, stared out over the ever-widening valley that led to the southern reaches of the Dale lands just south of the great Shimmerwood forest where the elves of old held power. The mouth of the tunnel his people had finally finished driving through the heart of Mount Wainsford gave him a perfect view of the beautiful land spread out before him, although, he realized regretfully the peace and tranquility of the Dales was about to be rudely interrupted by the new trade route his people were creating.

The whole world had been interrupted by the death of Adrammelech. His not-quite barbarian friend, Storm, impetuous and hot-tempered as always, had managed to maneuver Adrammelech into accepting a one-on-one death match and somehow, miraculously won the fight. Nearly a year later, the reverberations of that duel were still being felt in every corner of the world.

Dat lad is gonna git us killed one of dees days, he thought to himself. His fist clenched around the mithril scroll in his hand, unmindful of how crumbled and wadded up it became. He knew as soon as he released his grip it would spring back to it’s original, unblemished state; mithril always did. The scroll, written when it was still soft and malleable, hot from the forge, had become his most prized possession from the moment he first read it. He never went anywhere without it.

Making mithril scrolls was simple for the dwarves from the First Age, of which Durin was the only surviving member, solidified like a statue for thousands of year from misfired magic during the Chaos Wars until the soft voice of an elderly man finally penetrated his stony prison and woke him here in the Third Age.

The dwarves would write and bârâ a message onto a parchment scroll, forge a thin sheet of mithril, then press the two together as soon as the mithril came out of the forge. As the parchment burned, they would bârâ the handwritten words on it into the soft metal, preserving them for all time. The libraries of Thangadrim had once been filled with countless books containing mithril pages full of the accumulated wisdom of the First Age.

This particular scroll was from the only woman Durin had ever loved, Sheerah, now long dead and gone. It was her final declaration to him before she was killed in the destruction of the Chaos Wars that buried Thangadrim. He unclenched his fist, staring at the words on it, tears coming to his eyes again as he remembered reading it for the first time.


Beldria was the dwarven mother of two sons, Norgar, chief of the Norlode tribe and Ragrak, captain of the First Legion of the Norlode tribe. Norgar had sent her and Ragrak to test Durin to determine if he really was Durin the Stone Skinned, as they called him. The test Norgar wished Durin to take was to answer Beldria’s questions about the distant past. If he passed the test they would accept him as the rightful king of all the dwarves on Gaia. On the day they met she told him, “Me family is descended from a young dwarf who escaped from da destruction of Thangadrim. His mother was loved by two, including Durin the Stone Skinned, but she married another. Only our family knows dis and der names. If ye’re who ye say ye are, ye should know ‘em too.”

Durin knew them, of course; the woman was Sheerah, who spurned his proposal of marriage to marry Mamlakah, with whom she had a son, Jeshurun. Sheerah and Mamlakah died at Thangadrim, leaving only Jeshurun to make it out alive. He was the one from whom Beldria, Norgar, and Ragrak were descended.

Three days before the tunnel through Mount Wainsford was finished, Beldria called Durin to her chambers where she lay on her deathbed. Norgar and Ragrak, now sworn subjects to Durin, were at her side. In her hands she held an ancient wooden box, inlaid with carvings and precious gems.

The mood in the room was somber when Durin came in, the walls lined with dwarves from her tribe come to pay their last respects. He nodded briefly at the two brothers then knelt beside Beldria’s bed. “Ye wished ta see me, old mother?” he asked gently.

Her rheumy eyes focused on him with difficulty. Her chest heaved with the effort of speaking barely above a whisper. “Aye, my lord. In here,” she patted the box, “is a family heirloom which has been passed down from generation to generation, starting with Jeshurun.” She paused to catch her breath, then went on. “A mithril scroll, written in the tongue of Thangadrim, which none here today can read anymore.”

Durin nodded. After the division of mankind into men, elves, and dwarves, and the Sinking of Hothir, the dwarves were given their own language which came to be called the tongue of Thangadrim. Aside from a few sages here and there, he was probably the only one left in the world who could read it.

“Ye want me ta read it to ye, old mother?” he asked, thinking she wanted to know what it said before she died.

She shook her head. “Nay, my lord. Jeshurun said it was written by Sheerah and she said it was ta be read only by Durin the Stone Skinned. I left it behind when first we came ta see ye but Norgar brought it when he led da rest of our tribe here. And now, I ken finally deliver it to da one fer whom it was intended.” She pressed the box into his suddenly nerveless hands.

Durin was in shock. Sheerah had written him a letter? What was so important she would write it on mithril so it could never be destroyed? He wet his lips slowly, aware of the change in the room as the watching dwarves leaned forward intently. Carefully, he opened the ancient box.

Inside was a shimmering sheet of mithril, rolled into a scroll. Two rings of mithril, evenly spaced to divide it into thirds, held it in place so it wouldn’t unroll. In the center between them was a clay seal impressed with a design Durin never thought he’d see again, Sheerah’s personal seal from the ring on her hand, given to her by her father. Above the seal, words were impressed into the mithril sheet. They were written in the tongue of Thangadrim and said, “To be opened only by Durin, son of Drangor the Mighty, Third King of Thangadrim.” Durin stared at the words, the handwriting was clearly Sheerah’s. Her delicate touch was unmistakable.

“Tis her handwriting,” he said in a quaking voice. “I’d recognize it anywhere.” He fought back tears.

Beldria’s tissue soft hand touched his. “Ye must open and read it, my lord. Not fer us, but fer yerself to prepare fer what lies ahead of ye.”

She shook her head faintly. “I dinna know. I only know dat I know. Ye must read it, and that without delay.”

He nodded, rising to his feet.

Her whispery voice followed him to the door. “Ye mustn’t tarry, my lord. Ye must read it before death takes me this day.”

He found his way back to his private chambers, shutting the doors behind him and sat down at his desk, staring at the scroll. Despite his promise to Beldria, did he really want to read it? What could Sheerah say from beyond the grave that would do any good? She had torn his heart out when she married Mamlakah. After her, he could never love another. In a way, it was because of her he was still alive. If he’d been married, he’d never have been out on the balcony that day watching the Chaos Wars, he’d never have been turned to stone to survive thousands of years to arrive here in the Third Age. If he’d married her, he’d be long dead along with her.

He almost wished he was.

We could ‘ave been happy together, he thought fiercely.

He steeled himself, took a deep breath, and grabbed the scroll around the middle, holding it closed so it wouldn’t unroll when he took the rings off. He slid them off one at a time, then paused for a long moment. Once he released his grip, the scroll would open, shattering the seal and there would be no going back. He took another deep breath to steady his nerves, then uncurled his fingers and spread them wide.

The mithril sheet sprang open with a crack of breaking clay as the seal shattered in pieces. With shaking hands he held it up to read it:

As you know, I’ve been blessed, or some would say ‘cursed’, with visions of the future. Furthermore, these visions always come true. 15 years ago I had one about you. In it, we were married and deliriously happy. But then a great war broke out in the heavens and all over the world and you were killed trying to protect me. Today, we see that war all around us and some say the world won’t survive it, but I believe differently because the vision showed me one more thing; it showed you, alive and well in some distant age, sitting on the throne of Thangadrim, but only if I married Mamlakah instead of you.

Therefore, I refused your offer of marriage, though it broke my heart to do so and accepted Mamlakah’s offer instead. He knows I do not love him but his jealousy of you is so strong he doesn’t care, he only cares that he now has that which you wanted. It is a joyless marriage and my only happiness in it is Jeshurun.

If it is any comfort to you, your father knows of my vision. I told it to him the morning after it came to me. You are his pride and joy and more than anything he wants you to succeed him on the throne, so together we agreed on the course of action I took.

I know I’ve hurt you beyond measure. I see it in your eyes every time we meet or pass each other in the halls, yet you still manage to find it in you to care for Jeshurun simply because he is my son. He cherishes the hammer you gave him two years ago and never lets it out of his sight, although, it is getting too small for him now.

Please, my lord, if you can ever find it in your heart, please forgive me for the way I’ve wounded you.

I love you now and forever,
Sheerah


Durin dropped his head to the desk as huge broken sobs wracked his body.