Kor’s parents, Jorus Sheen and Aliura Lionne came to Coruscant, the capital of the Galactic Republic when they were just nine years old. Although they were from different planets and families, their stories were remarkably similar.

They’d started experiencing strange visions and manifesting unusual abilities. Tiny at first, they’d soon grown until their parents began to suspect they were Force-sensitives. Testing proved their suspicions correct and by law, they were shipped off to Coruscant to become Jedi. They met on the starship that took them on the final leg of their journey to the capital.

Their first day at the Jedi Temple had been a whirlwind of paperwork, physical exams, and blood tests as they were registered, poked, prodded, analyzed, scanned, and recorded. Late in the afternoon, they and 6 other children were officially initiated into the Jedi Order as padawans by Master Toofie.

He was getting ready to begin their first lesson when he was interrupted by a klaxon going off. Red emergency lights started flashing. Tremors shook the floor beneath them as explosions sounded in the distance.

Even though they were only Day One padawans, they could feel the shock waves in the Force as Jedi died somewhere in the vast reaches of the Temple. Every time Jorus told Kor the story, it was almost as if he was reliving it and he always started at the same place – the explosions.

Toofie was clearly startled by the distant blasts. “What?”

More explosions sounded and the lights flickered. The comm screen beeped and he dashed over to it. A strange face filled the screen when he turned it on. “Ragger! What’s happening?” Toofie demanded.

“Obi Wan’s apprentice, Anakin Skywalker, has turned to the Dark Side!” 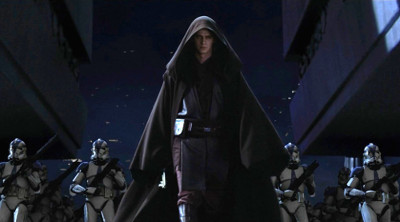 Ragger nodded quickly. “He’s taken the name Darth Vader and he’s leading an army of clones to attack the Temple. And fighters are bombing us too!” His words were emphasized by another series of explosions that shook the Temple. “Get your padawans out of here! Hurry!” The screen went blank.

Toofie turned. “Come on, all of you! Hurry!” He led them down the hallway to the lift. They crowded in behind him.

“Master! What’s happening?” one of them asked. The rest chimed in too.

“War!” he snapped at them. “Be quiet and do as you’re told. Maybe we’ll get out of this alive.”

Suddenly the lift jolted to a stop as all the power went out in the Temple. The lift was pitch black until Master Toofie activated his lightsaber. He jammed it into the lift doors and cut a big hole in them. They were about halfway between floors so they had to squeeze through the hole and drop down to the floor below.

Toofie looked around to get his bearings. “We’re on the third floor. Let’s head for the basement. There is an old exit down there that hasn’t been used in hundreds of years. Most people have forgotten about it.” He led them at a run down the hall to an emergency door that opened onto a concrete stairwell.

As they clattered down the stairs, Jorus had asked him, “How do you know about it?”

Toofie gave him a crooked grin as he opened the door at the bottom and ushered them through. “I wasn’t always a Master, you know. I was quite the rascal in my padawan days!”

The padawans laughed, enjoying a last moment of good cheer.

Toofie led them through a series of winding corridors lit only by the glow from his lightsaber. “The exit is just around the corner up ahead,” he told them. Suddenly, he shoved them all behind some boxes. Jorus and Aliura wound up across the aisle from the rest of them. “Be quiet,” he hissed

A set of double doors flew open and Anakin Skywalker, now Darth Vader, walked down a wide set of stairs, followed by what seemed like a million soldiers.

Vader’s eyes locked on Toofie’s. “Master Toofie,” he sneered. “One of the voices on the Council that refused to grant me the title of Master. Now I will refuse to grant you your life!”

Toofie crouched over his lightsaber. “Anakin! Stop this madness! There’s still time for you to turn back!”

Vader’s face filled with fury. “I no longer recognize that name!” he snarled. “My name is Darth Vader now!” He swung his lightsaber and the battle was joined. It was short and brutal. Within seconds, Toofie’s head rolled across the floor before the eyes of the horrified padawans.

A look of satisfaction crossed Vader’s features. He nodded at his soldiers. “Let’s finish this.” He started to turn away, but at that moment the six padawans across the aisle from Jorus and Aliura panicked and tried to use the Force to call for help.

Even though they were untrained padawans, Jorus and Aliura felt the flare in the Force and stumbled further back into the darkness away from them. They heard – and felt – Vader react to the movement in the Force.

Faster than they would have believed possible, Vader was slicing through the boxes and crates the padawans were hiding behind, cutting them to pieces before they could even raise their hands to surrender.

Once they were dead, Vader turned slowly, running his eyes over the rest of the basement, obviously using the Force to search for any more padawans. Jorus and Aliura held their breath, desperately trying to hold in any vestige of the Force that might betray them.

For a long moment, Vader scanned the huge basement. Finally, he relaxed and nodded. “That was all of them. Back upstairs,” he ordered. Without a second glance at the children he’d just slaughtered, he led his troops up the stairs.

Jorus and Aliura waited until they were certain Vader and his soldiers were gone. Even after that it still took every bit of courage and will power they had to force themselves to stand up on shaking knees and make for the exit Master Toofie had told them about.

As they stood, a crate next to them tumbled to the floor as the Temple rocked from another bomb blast. It burst open, spilling an intricately carved wooden box onto the floor. They could feel the Force surrounding it and on impulse, decided to take it with them.

They carefully averted their eyes from the bodies on the floor, afraid they might be sick if they looked at them, aware of how close they’d come to joining them.

They’d found Master Toofie’s exit. It was rusted with age but after a struggle, they’d been able to force it open and squeeze through. Then, for some reason, they turned and endured an equally hard struggle to close it again. After first they wondered why they were bothering, then it occurred to Aliura that if Vader and his men found the open door they’d realize someone had escaped and would start looking for them.

The weeks after that were a blur Jorus and Aliura claimed they could never remember. They said they still weren’t sure how they’d managed to stow away on a ship leaving Coruscant but with the Temple overrun and the Jedi betrayed, escape was the only road open to them.

They eventually wound up on a planet called Tatooine. They survived as street rats until they were taken in by an elderly engineer named Salvor Kolzaar. He taught them how to repair droids, skimmers, and other small equipment. When they grew up they got married, becoming Jorus and Aliura Sheen.

When Salvor died, he left his business to them. It grew and prospered under their ownership and they moved it to a new, larger shop near the spaceport in Mos Eisley. Years later, Aliura gave birth to a son, Kor.

A year after Kor was born, Aliura was killed by Imperial Stormtroopers. They were angry at the escape of a ship called the Millennium Falcon and started shooting at everyone in sight. Aliura had the misfortune to be in their line of fire and never had a chance.

Jorus was devastated by her death. He sold their business and moved to Bracca. It was a corporate shipbuilding and repair center. He was able to secure a position with one of the companies there, Ballador Shipwrights. He used the profits from the sale of the business on Tatooine to buy a small but comfortable house then plunged into his work to forget Aliura. As Kor grew, he began to join his father at work, becoming an apprentice in the shipyards, cutting up old starships for scrap.

Jorus and Aliura had never tried to open the box they’d taken from the Temple and wouldn’t let Kor open it either.

Jorus never really recovered from Aliura’s death. After hearing that the heroes of the Rebellion were killed on the forest moon of Endor by a suicidal Imperial ship crashing into their victory celebration, he couldn’t even console himself with the idea that she died for something greater than themselves. Kor was six years old at the time.

As the galaxy slipped into chaos after the fall of the Empire and the loss of the Rebel Alliance leaders, he slipped into a bottle of booze and never came out. Eventually, his drinking cost him the house and he and Kor had to move into transit barracks to make ends meet. In the end, it was his drinking that killed him. The only thing he left behind was the box he and Aliura had taken from the Temple.

After his father’s death, Kor decided to look inside the box and discovered that it could only be opened by someone who had the Force, thus confirming what he had begun to suspect. Inside was a note from an ancient Jedi named Morg Shippa.

Morg didn’t approve of the then-newly built Temple and the increasing centralization of the Jedi order it represented. He also didn’t believe the growing rumors about the midi-chlorians being the explanation for how the Jedi got their power. Nor did he approve of creating lightsabers that could be used by anyone once a Jedi had built them.

He created two items to train young padawans. The first was a set of wrist bands. They created training simulations indistinguishable from reality in which his avatar would train whoever was wearing the bands. The bands would prevent the wearer from using any of their Force abilities until after being trained in each one. Once his avatar judged them to have passed a particular training, their Force abilities in that area would be unlocked so they could be used in the real world outside the simulation.

Once the bands were put on, they wouldn’t come off until all the training recorded in them had been used. Morg’s note said the final simulation in the bands concerned how to use the second training item, a book filled with seemingly blank pages. Each page was another training simulation, this time very advanced. It could be used at the owner’s leisure.

Despite the fact he had the Force, he’d never gotten around to trying on the bands. He didn’t know if he wanted to become a Jedi or not. Based on what his parents told him, maybe the galaxy was better off without the Jedi.