After their fighting escape from Sicemon, the difference in the media coverage was immediate and huge.

Before, the coverage had been mostly positive or headed that way. ISN, GON, ORN, and DNB reported and cautiously congratulated them for a job well done. Even LITE-G hailed them as temporary heroes, although cautioning them against too much meddling in the affairs of other planets. GBS, PAN, ORA, and CORE reported the news straight and mostly without embellishment, although they renewed their plea for the Jedi to join the New Republic. Predictably, FOR reported the news with a pronounced slant and accompanied it with a demand that they save their healing skills for the First Order.

Afterward, irritated by their refusal to grant interviews or answer questions, the media turned on them for their “brazen flouting of safety laws in a regulated air space.” Then, President Tambor called a press conference and poured oil on the fire.

Kor and Prauf sat in the galley of the Whimsy en route back to Zosma watching the heavyset old man huff and puff his way through the press conference. “These interlopers deliberately violated our sovereignty, setting down on our planet without so much as a ‘by your leave’ or getting a proper clearance or invitation from the government. Then they tried to take more credit than they deserved for their part in developing the VEA’s, which our doctors were on the verge of finalizing on their own before these so-called Jedi showed up.”

Prauf waved a hand at the controls and the screen went dark. “I’ve seen enough.”

“Good thing we weren’t expecting to get paid,” Kor added.

The comm system beeped. It showed Jhemon was calling them.

Prauf hesitated. “Are you ready for another mission so soon?”

“Why not? They can only hate us so much.”

Prauf laughed. “I’m gonna have to take you pub-crawling sometime and see how much trouble we can get into.” He waved at the controls and the screen came to life showing Jhemon. “Hey, Dad, what’s up?”

Kor was pleased to note Prauf’s relationship with his father was becoming closer and more familial all the time. The first time they met Jhemon after buying the Whimsy, Prauf could barely force himself to address him as Father. 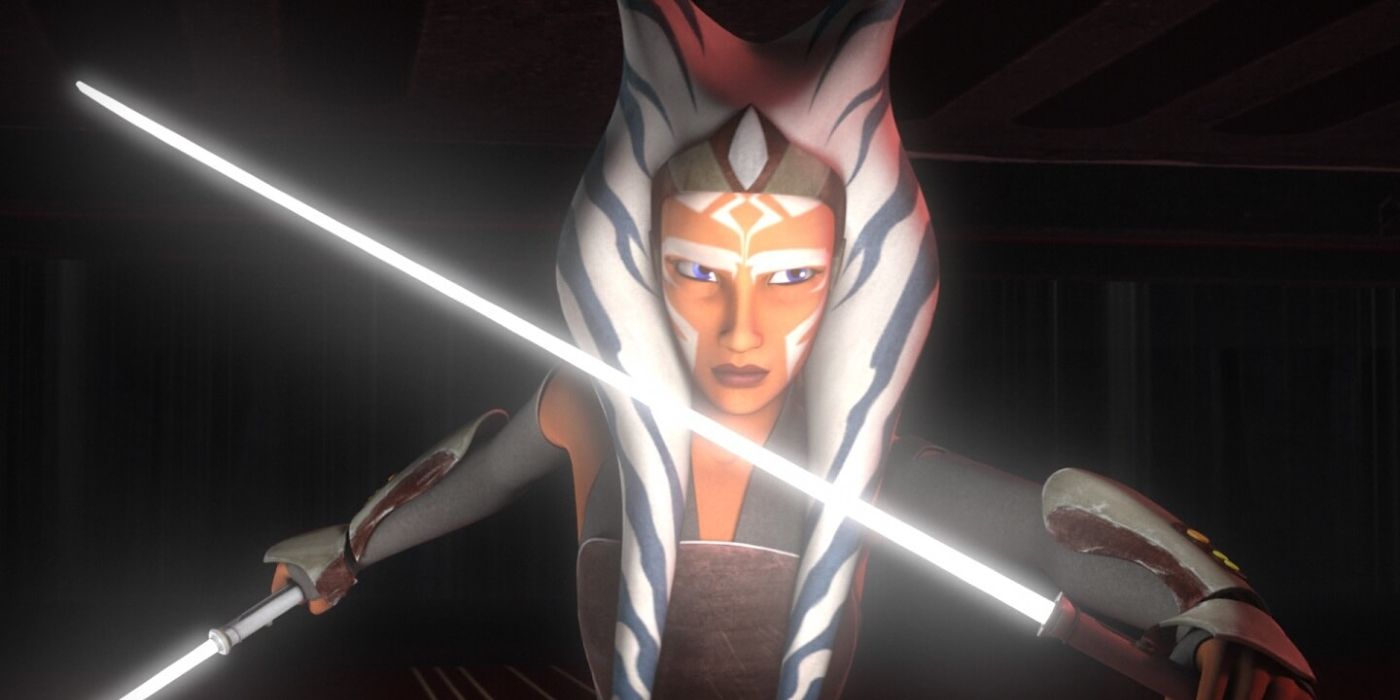 Jhemon nodded at them. “A couple of things. First, is a message from someone called Ahsoka Tano. Do either of you know her?”

Prauf dropped his feet to the floor. “Wow. I haven’t heard that name in years.”

He shook his head. “I know of her. The only time I saw her in person was during a battle on Christophsis during the Clone Wars. I got close enough to eavesdrop on a conversation she was having with someone named Obi-Wan Kenobi and Anakin Skywalker.” He glanced sideways at Kor at the second name.

Prauf held up a hand to forestall the explosion he saw coming. “It was years before he turned to the Dark Side. And, from what I heard, it was the first time they met. She was being assigned as his padawan.” He saw Kor start to calm down. “After that, all I ever heard over the years was stories and news reports mostly. If even half of them were true, she turned into quite the Jedi. But then she was accused of murder and kicked out of the Jedi. They turned out to be false charges and the Jedi offered to take her back but she was so hurt and angry she turned her back on them and walked away. That was about,” he paused, thinking, “I don’t know, several months before Anakin turned into Vader and the Empire took over.”

Kor leaned forward. “That was decades ago. What’s she been doing since then?”

“Hard to say. There were some rumors about her fighting against the Empire a few times, but nothing you could swear to.” He shifted his attention back to Jhemon, waiting patiently for them. “What’s she want?”

“I don’t know. It’s a coded message with a header that says only someone with the Force can open it. I can send it to you if you like.” He paused, waiting for their answer.

Kor nodded decisively. “Send it. If she’s on the up and up, it would be good to hear from someone who was a Jedi before the Empire destroyed them.”

Jhemon touched the controls. “Message sent.” Their comm system beeped, acknowledging receipt of the transmission. “The second thing may be a problem.”

Kor sighed. “What isn’t these days? Alright, what is it?”

“The New Republic is sending an emissary, Earl Treeak Malnu to meet you here on Aubreta, one week from now.” Kor and Prauf traded glances. They could guess at the subject of that meeting. Jhemon understood and nodded. “He didn’t come right out and say it but yes, they want you to join them – and they’re willing to pay handsomely.”

“The Jedi are neutral toward all governments,” Kor quoted hotly from their three rules.

Jhemon held up his hands. “I know, I know, but I think you should hear him out, for the sake of appearances if nothing else. A lot of people still aren’t sure about you and this latest incident on Sicemon has stirred up a hornet’s nest.”

“We didn’t start it,” Prauf flared.

“I know but the Republic hasn’t started anything either. This is their first official contact with you.” Jhemon was practically pleading with them. “I think you should meet them. It doesn’t have to be a long meeting, but at least do them the courtesy of listening.”

“We’re not joining them,” Kor reiterated.

“I didn’t say you were,” Jhemon said. “Just meet them and listen. That’s all.” He paused, waiting for their answer.

Kor gritted his teeth. “Fine. We’ll meet. But don’t promise them anything else.”

Relief washed over Jhemon. “Thanks. I’ll tell him right away.” The screen went blank.

“I guess my Father hasn’t changed as much as I thought.” Prauf looked disgusted.

“Hey, give him a break. Most of his life he’s been down on his luck, then suddenly, in the space of a few months he’s become rich and turned into a spokesman for the Jedi to the whole galaxy.” Kor have him a pleading look. “That’s a lot to take in. He can’t change overnight.”

“You did,” Prauf shot back.

Kor hesitated. “I have the Force as my ally, giving me a whole new way to look at the world, giving me powers and abilities I never dreamed of. Plus I have Morg, or his avatar anyway, to train me, and another Jedi to talk to. Your dad’s on his own.” He saw him struggling with it. “A couple of years from now, I’ll bet you won’t even recognize him.”

A grin tugged at the corners of Prauf’s mouth. “You don’t have to lay it on that thick.” He sighed. “Alright, I guess you’ve got a point.” He shifted gears abruptly. “You want to see what Ahsoka has to say?”

Kor felt a shiver run down his spine. “Honestly, the thought she was Vader’s apprentice scares me.”

“No, no. She broke with him before he became Vader. Besides, that’s your bugaboo, not mine. I want to hear what she says.”

Kor nodded cautiously. “Okay, but I don’t trust her.”

Prauf punched buttons. The screen put up two hand outlines, one for each of them. “Each of you place a hand on the screen for Force recognition.” Morg’s avatar had taught them how Jedi could embed Force “software” in a regular message to ensure it could only be read by another Jedi. The avatar warned them it didn’t really limit access to the Jedi, it limited it to Force-sensitive individuals. Whether they were Jedi or not was irrelevant. If they had the Force they could access the message.

Kor took a deep breath then placed his hand on the screen beside Prauf’s. A warm soft glow enveloped him. The path to opening the message was straight through the center where it was the warmest and most joyful. He and Prauf pushed through with a deep feeling of contentment. They reached the other side and felt the message open. They removed their hands and sat back.

“That was different than what Morg taught us,” Prauf ruminated.

“It’s more advanced,” Kor added. “It differentiates between Jedi and Sith. A Sith couldn’t have opened it.”

The screen flickered and a svelte Togruta female appeared. Her head tails, or lekku, were pale with stripes that varied from green to blue depending on the light, one on either side and a thicker one at the base of the back of her skull. Her horns, known as montrals, were connected to her lekku and had the same coloration. Her angular face had white face marking on her copper-colored skin. Piercing blue eyes stared at them. A faint smile creased her lips.

“If you’re seeing this message it means you’re not Sith. Only a true Jedi could have accessed it. So, I welcome you as fellow Jedi.” Her expression became slightly stern. “That being said, you don’t act like normal Jedi. Your feelings seem too strong and I know where that can lead if you’re not careful. My former master tried to kill me when he let his feelings turn him to the Dark Side. The only reason I survived is because he thought he succeeded.” She paused and her expression became slightly wistful. “It would be nice to have the company of other Jedi again but until I see where your feelings lead you, I can’t take the chance of our meeting. Instead, I urge you to control your feelings. Avoid anger and other strong emotions; they lead to the Dark Side. May the Force be with you and perhaps someday we can finally meet as friends.” She smiled as the screen faded to black.

Her smile made her beautiful and Prauf felt a stirring in his heart. He tried to hide it but Kor picked up on it right away. “Wow. You and her? Really?”

Prauf gritted his teeth. “Stay out of my head.”

“I’m not in your head but your feelings are so loud they’re deafening.” Kor tried to soften his words. He could see Prauf’s embarrassment.

“I never met her, just watched her from a distance when I was a bounty hunter,” Prauf said defensively. “I was amazed at a woman with all that power who still had so much fun in her.”

Prauf blushed. It was hard to tell with his gray skin but Kor found if you were watching closely you could see it. “She had an impish sense of humor, along with being a bit reckless.” He shrugged. “Given the uncertain life of a bounty hunter, that attracted me.”

Kor smiled and clapped him on the shoulder. “Well, if that’s what makes you happy, best of luck!”