The channels that favored the New Republic were apoplectic with rage over their treatment of Treeak. Three of them, GBS, ORA, and PAN, even hinted that their conduct might be indicative of hidden Sith who were actually working for the First Order. CORE didn’t go quite that far but they weren’t happy with them either.

The independent stations who had equal disdain for the New Republic and the First Order, decided to have some fun with it, enjoying Treeak’s embarrassment to the hilt. LITE-G took special delight in replaying Prauf tossing him sprawling across the room, over and over and over and over again. Then they played it in super slo-mo with sound effects added for extra amusement.

The social media boards went crazy over it as well. Those in favor far outnumbered those who didn’t, but there were enough on both sides to create a huge online fight about it. Kor found himself enjoying lurking on the boards watching the furor. Prauf pretended not to care but Kor caught him doing some lurking of his own a time or two.

Before they could get bored with it, a call came in from Jhemon about a new mission to the Mizar System. All the way to Aubreta, Kor cudgeled his brain, trying to remember where he’d heard of that system before. A quick glance at the navigational charts revealed it was a mining system but little else.

“Course laid in for the spaceport,” Prauf reported as they came out of hyperspace over the planet.

“Thanks.” Kor matched the Whimsy’s trajectory with the line on the screen until they merged into one. “We’re in the groove, five by five.” He cast a glance sideways at his companion. “I finally remembered where I heard the name Mizar before.”

Kor nodded as he kept his eyes on their course. “It was the first time I discovered all those news channels. A reporter on Tatooine was interviewing someone and they were complaining about price gouging on ore imports from Mizar.” A flare in the Force informed him of Prauf’s sudden concern. “Don’t get upset just yet. Whether or not it’s price gouging depends on which side of the bargain you’re on. One man’s price gouging is another man’s hard bargaining.”

Prauf had to agree. “Alright. Let’s wait and see what this emissary has to say. But I’ll be scanning him with the Force the whole time.”

Kor spared him a quick sideways glance. “You and me both.”

Melron came over the comm. “Hello, Whimsy. You guys just can’t stay away, can you? Jhemon told us to be expecting you.” His voice changed and became more official. “Sheer left and take Landing Pad # 2, next to the Mizar emissary’s ship. We’ll alert Jhemon that you’ve arrived.”

Kor landed quickly. They disembarked and fired up the speeder. They arrived just as Jhemon was emerging from his new underground house. He saw them and changed course to greet them, waving as he did. “I just got the message from Melron that you’d arrived. Emissary Sessra Fiefon is anxious to meet you, but,” Jhemon’s voice took on a warning note, “before he discusses anything he says he needs to test you to make sure you’re real Jedi.”

Kor nodded with resignation. “I’d hoped this lastest video would put an end to that.”

Jhemon waxed philosophical. “Give it time. A lot of people are still trying to get used to the idea of the Jedi being back.”

Kor didn’t feel like debating. Besides, he suspected Jhemon was right. Instead, he said, “We’re ready to meet the Mizar emissary whenever he is.”

Jhemon nodded. “He’s in his ship. I’ll have him meet you in the new meeting room.”

It wasn’t long before the emissary arrived. He was slender, covered in tiny iridescent green scales. His yellowish eyes had vertical irises. He looked like a snake that had been given arms and legs. He wore tight-fitting gray clothes but no shoes would ever fit his strange, boneless feet. His arms and legs didn’t have any obvious joints either. Instead, they were as supple and pliable as the body of a snake. When he walked over to meet them, it was with a disquieting, undulating movement. Kor sensed a dark turbulence in the Force around him, the same thing he’d sensed around Oleander, the mob boss they’d encountered on Castilon. A sideways glance told him Prauf saw it too.

“You are Jedi Masters Kor Sheen and Prauf ne Jhemon d’Aubreta?” His voice had a hissing, snake-like quality to it.

Kor stuck out his hand, but when Sessra attempted to take it, Kor used the Force to lift the emissary off the ground and move him across the room before setting him back down again.

“What are you doing?” Sessra was puffing himself up in outrage.

Kor refused to be intimidated. “Jhemon said you wanted to test us to see if we’re really Jedi. I trust that answered your question.”

Sessra paused. “That is true. I had not expected you to be so . . . forthright, with your demonstration, however.”

Kor’s Jedi senses told him Sessra was embarrassed, humiliated, and impressed. “I meant no disrespect, but neither do I believe in wasting time. You either accept us as Jedi or you don’t.” He made as if to turn away.

“No!” Sessra hurried forward, holding out a restraining hand. “I accept you as Jedi, I was simply startled at the way you demonstrated it.” He drew himself up and bowed formally. “I am Sessra Fiefon, High Emissary of the Council of Mizar, sent here to negotiate with the new Jedi for your help.”

Kor returned his bow. Despite the shadows swirling around him, Sessra was telling the truth, so he was willing to listen to him for the time being. “Kor Sheen and Prauf ne Jhemon d’Aubreta of the Jedi Order.” Prauf gave the emissary a slight bow as well. Kor waved them toward the table. “Now, what can we do for the Council of Mizar?”

Sessra sat down across from them. He was startled by the living chair. When he finished exclaiming over it he put a hologram projector on the table and activated it. A slowly rotating image of a solar system appeared in the air between them. The G-type star had four planets, two inner rocky planets, two gas giants, and beyond them, two asteroid rings. The second planet, a blue-green orb, was labeled Mizar. 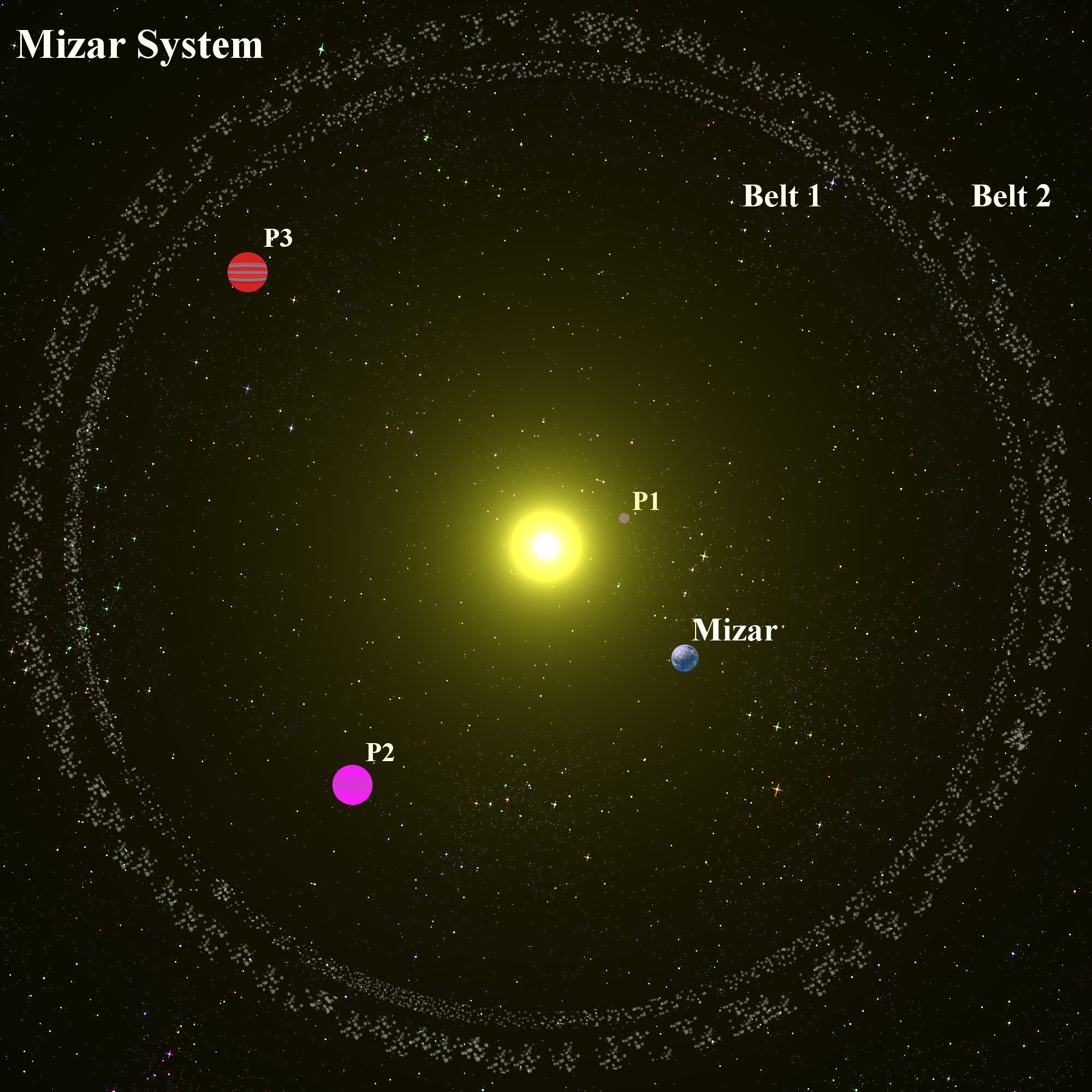 “Mizar is a mining system,” the emissary told them, which they already knew. “The asteroid belts are rich in mineral deposits of all kinds; rare earths, heavy metals, everything. The planet Mizar, on the other hand, is poor in everything, including the atmosphere. It had to be terraformed several centuries ago to be able to support life, so everything in our system is dependent on mining the asteroids.” He looked at them to make sure they were following him.

Kor’s senses told him Sessra was being truthful so far. He inclined his head. “We understand. Go on.”

“Thousands of independent miners mine the asteroids, then bring their minerals to hundreds of terminals scattered around each belt. From there, it’s loaded onto cargo haulers for transport to Mizar where it’s smelted, purified, and sold to customers throughout the galaxy. We never had any trouble until two years ago.”

Kor could already see where this was going, and Prauf sent him a mind-talk image of pirates attacking a ship. He sent back a flare of agreement. All the time, Sessra continued talking, unaware of the byplay between the two Jedi.

“That’s when the pirates appeared. They attack the cargo haulers before they can get clear of the asteroid belts to make the jump to hyperspace. The trip to Mizar only takes a second or two, but getting clear of the asteroids takes nearly half a day. During that time, the ships are completely vulnerable.”

Sessra’s body made an undulating motion they interpreted as a shrug. “They’re cargo ships. A few of them have had a turret or two added over the years but most are defenseless.”

“And your security forces?” Kor prompted him.

Sessra shook his head. “Their main duties are stopping bar fights and scraping up the remains of drunk idiots who drive too fast. We have a couple of old battlecruisers and some fighters but they can’t be everywhere at once and the pirates never hit the same place twice in a row. By the time they arrive, the pirates are long gone.” He began to get agitated. “In the meantime, our ships are being damaged, their crews injured or killed, and we’re losing business. If something isn’t done, we’ll starve.”

Prauf scowled at the slender alien. “It sounds like you want us to be bounty hunters.”

Sessra shook his head again. “Not at all. As I understand it, bounty hunters track down and bring back criminals who have escaped from prison or jumped bail. We don’t want the pirates brought in. We want them stopped. Whether you kill them or run them off is up to you. We just want it stopped so we can provide for our families.” He turned a datapad around and slid it across the table so they could read it. “And we’re prepared to pay you a reasonable price for it.”

Kor stared at the number on the datapad, it was easily a thousand times what he’d paid for the Whimsy. He tried not to let his reaction show.

That would set us up for life, kid! Prauf’s mind-talk carried with it his unmistakable surprise.

They must really need our help, Kor said.

You ain’t kidding! Prauf paused. But it’s pretty dark around him. It looks like he’s a sleazeball like Sanarrn. He was referring to the leader of the mercenary army that attacked his families’ village with the Claw.

We’re neutral toward all governments, remember?

Prauf growled wordlessly in the Force.

Kor looked at Sessra. “Maybe you haven’t been watching our videos. We don’t work for hire. When we’re done, we’ll accept whatever you decide to give us. Right now, we need to visit the planet first and talk directly to the Council. After that, we’ll head to the asteroid belts and find the pirates.”

Sessra nodded. “You’ll only have to talk to Zark Jien, but other than that, anything you need is yours.”

Kor sensed desperation rather than danger from Sessra, although there was some of that too. He knew Sessra wasn’t telling them everything, but what he had told them was the truth. For the present, he was willing to give him the benefit of the doubt. Beside him, he could feel Prauf’s grudging approval.