Due to a supposed uptick in the number of COVID-19 cases as the result of more tests being available, which naturally would detect more of the preexisting cases already spread throughout the population, Abbot’s quisling heart has flinched before the might of the woke mob and media (but I’m repeating myself) to reimpose a totalitarian demand that everyone in Texas wear face masks virtually everywhere or “face” fines of $250.00.

Abbot’s executive order is filled with an impressive array of “WHEREAS” statements that appear to lend weight and gravitas to his order but instead reveal a complete lack of understanding of the latest tricks and chicanery being used by the Left to hype what is essentially a bad flu season into an apocalyptic end-of-the-world scenario.

For instance, one of his WHEREAS paragraphs claims that wearing a face mask is important in preventing the spread of COVID-19 by people who are infected but asymptomatic. This ignores contradictory statements released by the World Health Organization (WHO) which said on June 8th that such transmissions were rare, then one day later on June 9th reversed itself and said exactly the opposite. If the supposed experts can’t even make up their minds from one day to the next, how can Abbot justify basing life-altering executive orders for the whole state on their so-called findings and recommendations? What happened to the principles he supposedly had?

Oh, that’s right. He’s a modern Republican, he was just pretending to have them.

His hypocritical order, by the way, has no stated end date. The order went into effect at 12:01 pm July 3rd but it never specifies when it will end. Instead, it ends with this charming little tag line, “This executive order shall remain in effect and in full force until modified, amended, rescinded, or superseded by the governor.”

In other words, it’s forever unless Abbot, in his infinite wisdom, decides to pardon us proles from what is literally, in-your-face tyranny. Forget the medical aspects for a moment though, it’s an end run around the normal legislative process that is supposed to be how we pass laws as well as being a direct violation of the 13th Amendment of the Constitution of the United States of America.

The 13th Amendment is the one that was passed after the previous Civil War, you know, the one that outlawed slavery. But, and this is the part most people don’t realize, it does a bit more than that too. What it actually says is, “Neither slavery nor involuntary servitude, except as a punishment for crime whereof the party shall have been duly convicted, shall exist within the United States, or any place subject to their jurisdiction.” [emphasis added]

I said “previous” Civil War because we may be heading for a second one but that’s a topic for another day.

Notice the part about involuntary servitude. It’s not slavery but it’s right next door to it. When you are forced against your will to perform some work or take some action, and it’s not being forced on you as a punishment for a crime you’ve been convicted of committing, then it falls under the definition of involuntary servitude. You’re being forced to serve another against your will or under compulsion or threat of force or fine.

Abbot’s orders, and frankly, all the dictatorial orders by governors and mayors everywhere, run afoul of the 13th Amendment. Quarantines, and face masks are a type of quarantine, are designed to isolate sick people but a test showing you have the antibodies for COVID-19 doesn’t mean you’re sick. It means you either had it, got sick, and got over it or you were infected and your body kicked COVID’s butt before it could do anything. Forcing you, without any conviction of a crime or proof of danger to others, to take the action of putting on a face mask under the threat of a $250 fine is the very definition of involuntary servitude.

Wear it or else.

As music from The Godfather plays in the background, you can almost hear Marlon Brando saying, “There will either be a mask on your face or you’ll face a $250 fine.” 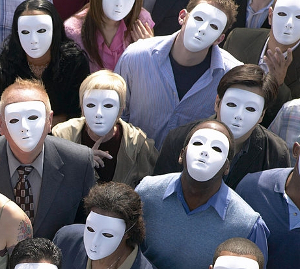 The godless, pagan Left hates freedom and liberty. They want to turn us into faceless automatons, unfeeling robots who’ll do as we’re told. Face masks that rob you of your humanity are a great step on the way to accomplishing that goal. Involuntary face masks are even better.

Republicans are the ones who are supposed to defend us from those monsters; that’s why we voted for them. Voters in Texas decided that Governor Good Hair (Rick Perry) wasn’t getting the job done so we elected Greg Abbot on the theory he’d do what Perry couldn’t or wouldn’t.

Three years later we’re reaping the fruits of that decision and unfortunately, like Esau in the Old Testament, it looks like we traded our freedom for a mess of pottage.