As Christians, Conservatives, and Republicans are well aware, Twitter has a habit of locking people out of their account for espousing messages that Twitter and it’s Leftist employees don’t like or disagree with. Twitter will lock their accounts on the most spurious of grounds, often after receiving a single complaint from someone who doesn’t like what they wrote.

While it’s true that the First Amendment doesn’t apply to Twitter with the same force it applies to the government, some rules must be obeyed by all parties concerned, particularly when it comes to the crime of libel.

According to multiple sources (see here, here, and here), libel is a type of defamation and is defined as an untrue defamatory statement made in writing. It’s important to note that digital statements count as writing.

Hate speech and hate crimes are accusations often used as the basis for locking someone’s account on Twitter. The problem is, neither term has any legal meaning in the United States. On June 19, 2017, both the Washington Post and Reason Magazine carried articles with virtually identical titles, “Supreme Court unanimously reaffirms: There is no 'hate speech' exception to the First Amendment.”

Just as hate speech is not a crime, neither are hate crimes actual crimes in and of themselves. Instead, a hate crime is a crime that was motivated strictly by hate for a person’s race, religion, disability, sexual orientation, ethnicity, gender, or gender identity. 18 U.S. Code § 249 defines hate crimes as follows:

In every case though, a violent crime must have taken place.

Hateful conduct, however, doesn’t have even that much recognition in the law. In the law, there is no such thing as “hateful conduct”. There is only a hate crime because a violent crime was motivated by hate.

Since hateful conduct is not a legally recognized term in the United States and has no commonly agreed-upon definition, it falls into the category of mere opinion. While everyone is entitled to their own opinion about anything, once they begin presenting that opinion as being factual about someone, it has crossed the legal line into libel.

Twitter libeled me with an accusation of hateful conduct and used that accusation as the basis for locking my account. 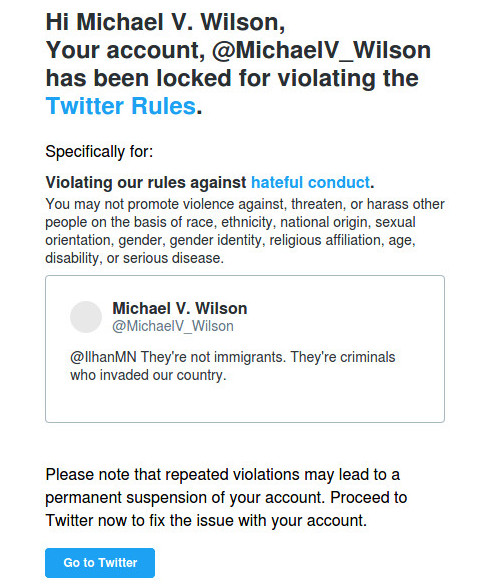 This is a screenshot of the libelous message I received from Twitter informing me that my account was locked. Notice their definition of hateful conduct. They state that “You may not promote violence against, threaten, or harass . . .” and then they list a long series of items, race, ethnicity, national origin, etc.

The message I sent was to @IlhanMN, the Twitter account for Representative Ilhan Omar (D) from Minnesota’s 5th congressional district. Her tweet that inspired my response was this: 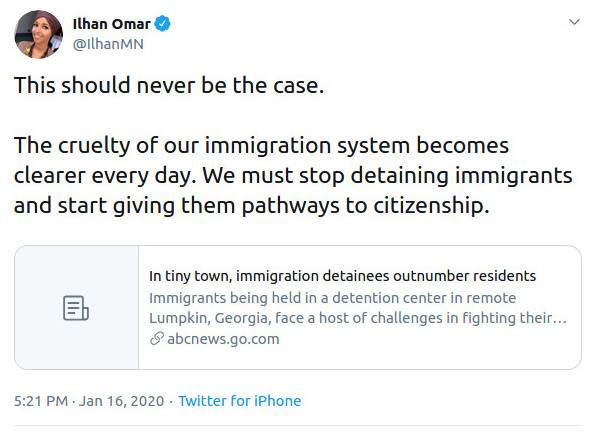 You can see at the bottom of her tweet, she was referring to a news story on ABCNews about “immigrants”. The story, written entirely from a position sympathetic to illegal aliens and decried how they were being treated. I read the story and was prompted to reply to Ilhan’s comments.

My reply, “They’re not immigrants. They’re criminals who invaded our country,” is 100% factual and accurate. An immigrant is someone who entered our country in accordance with the law. The U.S. Immigration website and the IRS website both agree on this. Whether it’s popular or not is completely irrelevant. I didn’t promote violence, threaten, or harass anyone. I simply made a statement of fact.

Twitter’s accusation against me is therefore libelous and caused damage to me that was defamation per sé, which gives me cause to sue. Now, let’s continue with more of their libelous actions against me. 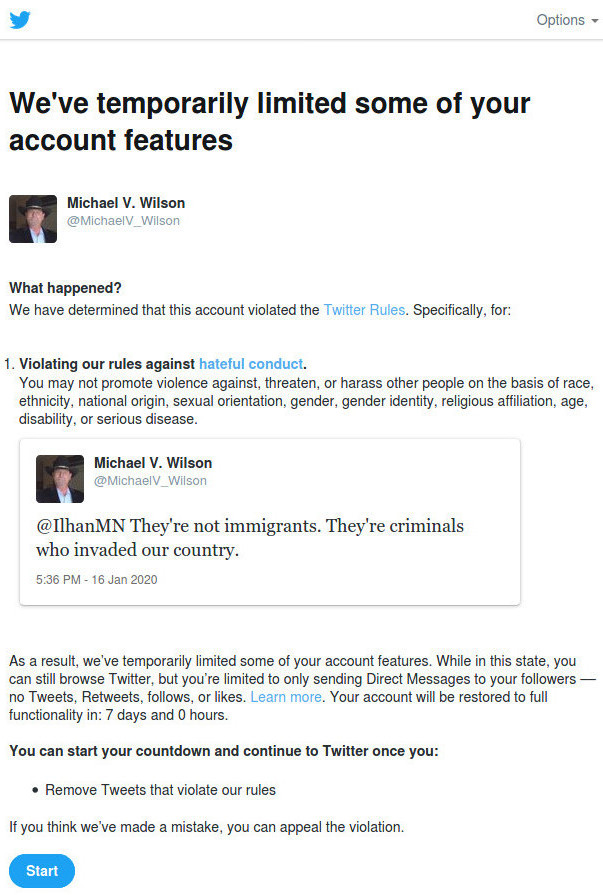 Once again you see them libeling me by stating that I’ve violated their rules on hateful conduct (2nd accusation of libel). At the bottom, they announce that my account will be restored 7 days after I delete the tweet in question. Here is a 3rd screenshot where they threaten to continue their libel if I don’t agree with them. 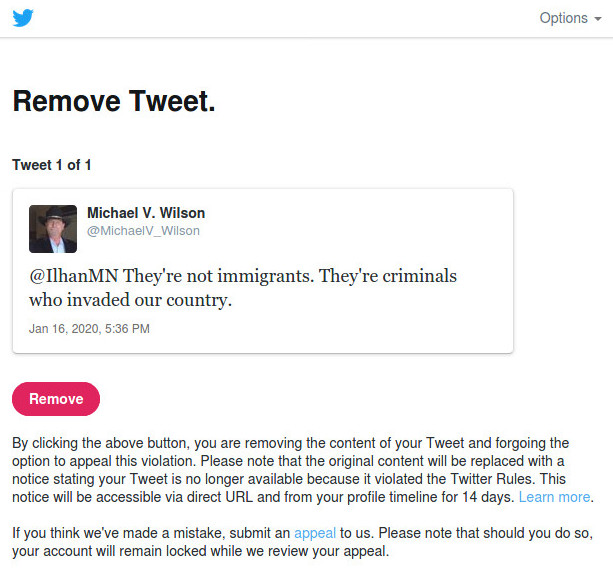 Notice what they’ve done. The only way to get your account unlocked is to agree with their libel. If you dispute their libel, they’re going to keep on libeling you by continuing to lock your account while they investigate whether or not they’re libeling you. It’s a perfect Catch-22.

Furthermore, the threat to continue libeling me and keep my account locked during any “investigation” is blackmail, pure and simple.

From here, I can also demand a personal apology from Twitter CEO Brandon Hampton (@CEO). I demand that he come to my house in Texas and apologize to me in front of the news media while all the cameras are rolling. Since Twitter libeled me in public, I demand that they apologize in public.

Since posting this story over two years ago, back in January of 2022, I finally had enough of Twitter and closed my account. Since Elon Musk offered to buy Twitter, and they finally caved to the inevitable, I’ve considered going back.

If the number of fake/spam/bot accounts is higher than 5% it means Twitter lied to the SEC. If you or I did something like that we’d be in jail so fast it would make our head spin but maybe Twitter thinks they can get away with it because – leftism. We’ll have to see how it all shakes out and what fines, if any, Twitter will have to pay if they did lie to the SEC.

In the meantime, I think I’ll wait a little longer before reactivating my account.